Welcome to world of cartoon are you excited to know how cartoon is different from anime and what are some cartoon that are good to watch.

Cartoon is a simple drawing showing it features of the subjects Neocities.

main thing abount cartoon is when you drawing it features and subject text.

what are the different between Anime

Cartoon the characters usually have features that are not relative to the rest of the body. they come from reality than anime.

Disney is a company were they make cartoon. For example Mickey Mouse it is most well know in Disney.

OR you can watch Disney were most kid watch movie for example Lion King, click it to watch some cartoon in Disney

This is Mickey mouse. Mickey Mouse is a funny animal cartoon character was created by Walt Disney around 1928. Which is mouse who have wears red shorts, large yellow shoes, and white gloves, Mickey has become the most recognizable cartoon character in the world.Mickey first was seen in a single test screening was a short flim.

The second picture is Mickey Mouse, Minnie Mouse, Donald Duck, Daisy Duck, Goofy and Pluto.Mickey Mouse was wear a mouse wear red short. Minnie was designed in the fashion of a "flapper" girl. Her main outfit consisted of a short flapper girl dress. Donald Ducks is a white duck with a yellow-orange bill, legs, and feet. He typically wears a sailor shirt and cap with a black or red bow tie. Daisy Duck is a white duck, but has large eyelashes and ruffled tail feathers to suggest a skirt.Goofy is a tall and typically wears a turtle neck and vest, with pants, shoes, white gloves.Pluto He is a yellow orange-color, medium-sized, short-haired dog with black ears.

The Thrid picture is some Disney character. All these Disney chaeacter were made in Disney to entertain little kid to whatch the movie.

The fourth and fifth picture is Grafield and tweety bird.Garfield is an American comic strip created by Jim Davis. Published since 1978.life of Garfield the cat,Jon his owner, and Jon's dog Odie.Tweety is fictional yellow canary in the Warner Bros.

The next picture is tinker bell.Tinker Bell is a fictional character.She has appeared in multiple film and television adaptations of the Peter Pan stories.Tinker Bell as a young, attractive, blonde haired, big blue eyed, white female.

All The picture here are copyright and all them from the internet.Please enjoy picture

Here some video from Disney 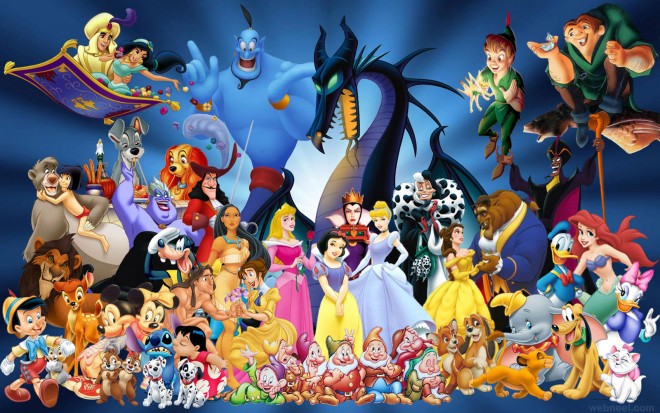 If you want other pages Jasmine Leo Shu